Frank and I had quickly grown to love Kyoto in our short time there. It’s such a lovable city; historic, friendly and manageable – all things that Tokyo is not.  I boarded the train at Kyoto Station with a mix of anticipation, wonder and dread….. But I wanted to maintain an open mind regarding Japan’s capital city, so I consulted my new best friend, Lonely Planet, about all that Tokyo has to offer.

Once we arrived at Tokyo Station, we navigated our way through the spider-like metro system to our hotel, “The b Roppongi.” I had read (and heard) that the neighborhood of Roppongi was known for little else than it’s seedy nightlife reputation and expansive malls, so needless to say, I wasn’t thrilled about our choice of hotel locations. But it turned out to be conveniently located within the vast, sprawling city of Tokyo, and I was pleasantly surprised with the malls. In fact, we ended up spending quite a bit of time in these malls, which is why I’ve deemed Day 1 “Mall Day.”

It was sweltering hot when we arrived at our hotel, so we decided to head to the first mall to find relief from the heat. I usually have an aversion to doing anything in a mall besides shopping, but due to the heat and my grumbling stomach, I caved. This mall, “Roppongi Hills,” is the biggest, nicest mall I’ve ever seen. It houses hundreds of shops, dozens of restaurants, office space, a residential compound, an art museum, an outdoor auditorium, and the Grand Hyatt Hotel, all surrounding an ancient garden that was once part of an Edo Era feudal lord’s estate. Pretty impressive.

We ate, walked around for awhile, and then on our way to the other mall, we popped our heads into a pet shop. Big mistake. Did you know that they don’t just sell puppies and kittens in Japanese pet shops, but also meerkats (like, as in the Animal Planet show, Meerkat Manor), little tiny monkeys, and unidentifiable rodents…? Sad.  For a brief moment I wondered what complications I’d encounter trying to smuggle one of the mini-monkeys through customs, or how much trouble we would get into by setting one free, but then I comforted myself by thinking surely someone will scoop that little guy up soon and love it like their very own!!

Earlier I said that Roppongi Hills was the nicest mall I’d ever seen, but I came to that conclusion before I’d seen this newer, even more awesome addition to the neighborhood: “Tokyo Midtown.” Same concept: shops, restaurants, hotels, offices, condos, green space… but this one also had a 24 hr grocery store,  a doggy hotel and spa, and a fruit store that reminded me of something out of Charlie and the Chocolate Factory. Frank and I marveled at the $300 square watermelons, mangos the size of footballs, and citrus fruits that had been scalped, emptied of the good stuff, which they had processed into jelly, then put back in… Not sure if I explained that well…. It was like citrus jelly housed in it’s own original home: the orange, lemon or grapefruit. I tried the grapefruit. It wasn’t worth the $7 Frank paid for it.

Someone told us that the reason the Japs have such giant-sized fruit is because they believe that if they prune the vines or trees down so that all the focus is on one piece of fruit instead of many, that this one piece will receive all the nutrients and basically be a super-fruit…. The Japanese do some weird shit.

We wanted to see as much of Tokyo as we could in the short amount of time we had there, so after some exploration of Tokyo Midtown, we walked to Harajuku, about 45 minutes away. If the name sounds familiar, its probably because you’ve heard of Gwen Steffani’s entourage of Japanese girls that she pays to accompany her everywhere. They’re from this neighborhood of Tokyo. It’s known for the “babydoll” fashion. 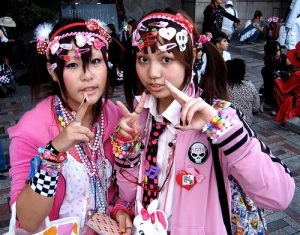 Again, the Japanese people do some weird shit.

It didn’t take long for the novelty of the main street of Harajuku to wear off. I can only take so many girls dressed as dolls, guys dressed as girls, and African guys trying to lure us into their sneaker store by soliciting us with binders full or photos of Nike high tops. So off we strolled to Omototesando, which is supposed to have trendy fashion stores that are a little more realistic for people who aren’t living in a babydoll dream-world. It was getting late and everything was closing. We agreed to come back the next day to browse.

A friend of a friend who lives in Tokyo recommended that we hit up this “heirloom pork” restaurant in Tokyo Hills, so back to the mall we went. Again, I hate the idea of eating dinner in a mall, but we were kinda on a roll with mall-dining, and we were curious about this pork. I’ve heard of heirloom tomatoes and heirloom carrots, and honestly, I’ve always just associated the word “heirloom” with “ugly,” since all heirloom veggies look deformed… I hoped the pigs weren’t deformed. The fried pork loin, sliced proscuitto, and pork ramen were mighty tasty. And they even had a picture on the menu of the adorable pig-family that we were indulging in. They weren’t deformed.

We called it an early night because Day two had a LOT in store, and it was gonna be an early morning.

We woke up at 4am to be at the Tsukiji fish market by 5am, which is when you have to get there if you want to be one of the 20 people who are allowed entry into the tuna auctions. We really wanted to witness, first hand, the craziness of 10’s of thousands of dollars worth of tuna being tossed around, but unfortunately, there were 20+ more dedicated people who wanted to witness it even more than we did, so we were turned away. We were bummed, but took advantage of the opportunity to beat the crowd to the famous “Sushi Dai,” a little restaurant within the market area which serves sushi fresh off the boats from 4am until they run out. Yeah, it definitely felt strange and uncomfortable eating hard-core sushi at 5:15am, but I tried to think of it more as a middle of the night meal than a breakfast. Frank and I both ordered the Omekase (remember that word from the last post?), and left the decisions up to the these guys… 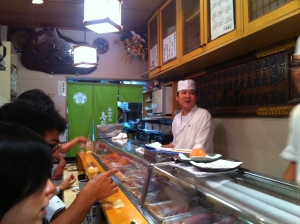 I can’t really describe the bliss of this meal. Piece after piece of soft, buttery fish was delicately placed directly on the table in front of me, and I loved every moment of it. 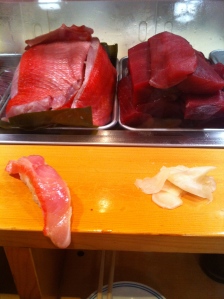 ↑ That slimy lookin thing.. that’s Uni (sea urchin), and it was damn delicious.

At the end of our meal, we got to choose one more of whatever fish was our favorite. I chose eel because it literally melted in my mouth and was so rich and sweet that I thought it would serve as a nice dessert. Frank chose toro (fatty tuna belly). Neither of us were interested in venturing to try the “sperm sacs of cod fish,” but luckily for us, the guy sitting beside us did, so we got to see his horrified face when he put it in his mouth…I’m glad my adventurous eating habits have their limits.

Fat and happy, we waddled out of the small sushi bar. But then we had 3 hours to kill before the market opened to the public, and we really wanted to see the tuna (shipped in from New England, or course) that could turn a fisherman from rags to riches, so we deliriously piddled around for a few hours….

……then dredged through fish blood and guts in the market for a half hour or so before heading back to Omotessando for some shopping.

By 4pm we were beat. We went back to The b Roppongi for a rest, then freshened up to meet our friend-of-a-friend, Michael (the one who recommended the heirloom pork place), for a drink and dinner. We met him at the mall (of course) and had some saké and cocktails before meeting his friend and girlfriend for dinner. Michael found himself in Tokyo 6 years ago with an ESL teaching job, which led to a recruiting position, which led to acting work. He’s basically the token white guy in commercials, TV shows and movies. We were hanging out with a celebrity!! He said it’s always been his dream to act, and he made a good point by adding “I could go to LA and be a dime a dozen, but here I’m exotic and in-demand.”  True.

Michael was super nice and courteous, and he took us to an awesome Korean BBQ joint where you cook your own meat on the grill at your table. Frank awarded this the best meal of the trip. The Wugyu beef barely needed chewing, it just melted.

Great end to our trip. We sat around talking and eating and drinking until it became a real struggle to keep my eyes open (it had been a loooong day, after all), then headed home to pack and prepare for our journey home.

I’m sad to say that we did not sing Karaoke, witness a Sumo match, or see a vending machine full of Japanese school girl’s panties (as I’ve been told exist), but I guess all that will just have to wait until our next trip to Japan….