yay. I’m so glad I have a little time to write this post. I’ve been swamped, but I’m excited to tell y’all about my new digs!

My pod arrived last Saturday with only a slight hang-up. The week before, I spent an afternoon going down to City Hall for the No Parking signs and flyers to place on car windshields to warn drivers not to park where the Pod would rest, as well as taping these signs to nearby trees.  Day after day I would check that people were obeying my rules. You can imagine my shock and anger when, on Saturday morning at 7:30 (my Pod was arriving at 8am) a few ballsy residents had blatantly ignored my signs! They were parked where my Pod was supposed to go and the Pod-truck was rounding the corner to unload!!! I really hated to do it, but I was forced to call and have them all towed. Really, I felt awful. Great way to start off on a terribly wrong foot with all my new neighbors… Pod-man said he could only wait 10 minutes for the tow truck but then he would have to leave….. I knew there wasn’t a chance in the world the cars would be towed within 10 minutes. He said MAYBE drop-off could be rescheduled for later that day IF I called back with news of vacant spots within the hour. Then he left. Forty minutes later a cop rolled by, we spoke briefly, and in no time he had found out who the cars belonged to, knocked on their doors, and they moved their cars. I was relieved that I didn’t have to be the bad guy who was having people towed on day 1, but I have to admit I was a little pissed that these bastards didn’t have to pay for blatantly ignoring my signs causing a massive delay and major headaches. I mean, really! They had no idea how badly they just screwed everything up for me! Everything had to be rescheduled.

But in the end, everything turned out okay. My pod was successfully delivered (with very little room for cars to pass on my narrow, alley-like street) and by Sunday, Frank and I had unloaded the beast. The only problem we had while unloading was that my box springs wouldn’t fit up and around my staircase. On our second attempt to jam it in, we busted a hole in the hallway ceiling. Oops. Another great way to start my tenancy. No problem though – I went to Ikea to pick out one of those Swedish beds that has wooden slats instead of box springs. It’ll have to do for now. It’s actually pretty cute. Frank and I spent two hours putting it together a few nights later. That Ikea stuff has a LOT of screws and bolts and random pieces, and the directions aren’t exactly explicit. But we managed.

I had everything else arranged in no time. I’ve moved enough to be an expert at immediately having the place look “lived-in.” I hang pictures asap and quickly make things cozy. This is the opposite of my darling boyfriend who will leave unopened boxes around for an entire lease term.. Thanks to me, his place is entirely unpacked : )

Despite my lack of overhead lighting, very minimal closet/storage space and no dish washer, the apartment is perfect for me. I love it. I’ve bought numerous lamps and discovered a bright overhead oven light, which has been life-changing; I’ve managed to squeeze every last inch out of my closet and under my bed for clothes and various clutter I’ve collected over the years, which conveniently arrived with my pod; and I’ve learned to clean dishes directly after I use them to avoid sink pile-up.

I’m on a quaint little brownstone-lined street right in the heart of the South End, near the Back Bay train station (yes, this is on the orange T line), ten minutes to Frank, and right around the corner from numerous restaurants and bars. I have the second floor of a three story brownstone. My upstairs neighbor has birds, which at first I thought would be obnoxious and smelly, but they have turned out to be pretty pleasant. I enjoy their jolly chirping throughout the day. My downstairs neighbor’s smoke cigs, and the smell sometimes wafts up through my open windows, but it’s not too bad. Occasionally, late on Monday nights/early Tuesday morning when trash and recycling are out, a clan of Asian bottle thieves rummages through the garbage for recycling items they can turn in for cash. They push their grocery carts down the uneven alley street and clink clank around until they are satisfied with their finds. The first night I was horrified! I couldn’t believe that the residents would tolerate this. But in the past few weeks I’ve learned to ignore it. Even though it bothers me a little, and Frank says I should tell them to “get lost” in Chinese, I consider it just one of the downfalls of living in close proximity to Chinatown. Can’t blame ‘em for trying to make an extra buck out of other people’s thrown away junk…

Anyway, the place will be complete when I find the perfect coffee table, and when my rug from Urban Outfitters finally arrives. Doors are open. Come and see me! 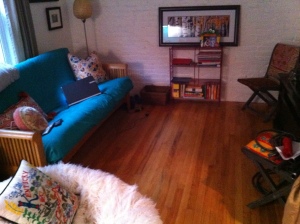 Notice the furry bean bag chair. I bought that thing in NYC, hauled it down to my W. Village apartment via taxi, rented a car to drive it home to KY, and now it’s made it all the way back up North. Frank hates it. I’m attached to it.

Oh, and I took this pretty picture while on a lovely morning run. Boston is so beautiful right now….. calm before the snow storm. 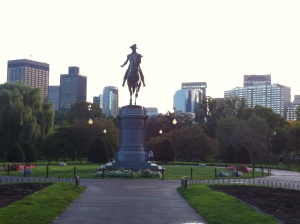