Y’all are probably wondering what the hell I’ve been up to, since I’m sure you check your email for updates and new posts daily… and there’s been nothin. This semester at school’s kept me busy with reading, observing classrooms, writing up grammar point syntheses and creating curriculum units… fun stuff! But my lack of posts hasn’t been for lack of inspiration. In fact, Frank and I’ve been pretty active. Here’s a (relatively) short recap:

We spent a long weekend in Montreal, via Burlington Vermont. I can pretty much sum up that wonderful trip by saying “food and drink.” We loved Montreal. I’d  describe it as “gritty chic.” The French influence was what we liked so much about it, which brings me back to my earlier sum-up: food and drink. We started each day with croissants, then made stops all around the city eating crepes, poutine (a delicious French/Canadian artery clogging creation of fries+gravy+cheese curds), baguettes and butter, steak frites, duck confit, and wine. Lots of wine.

This was our breakfast every morning. I think I gained 10 lbs in 3 days. 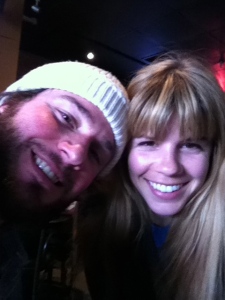 This is the only picture we took of ourselves. Frank is a scrooge about pictures.

For a few hours one day we did something besides eat. We climbed Mount Royal, which is right on the edge of the city. Literally, right beside the big tall buildings there’s a gradual, then steeper  and steeper incline. By climb, I mean we walked up a bunch of icy steps, which was pretty brutal. But the view at the top, overlooking the city, was worth the risk of slipping and breaking your leg. What we loved most about this morning exercise was that it worked up a growling hunger, something we hadn’t even begun to feel in days… which is what happens when you eat, and eat again before you ever start to feel that tinge of hunger. We were also nice and sore for our drive back the next morning. Fun trip! But we decided next time we’d fly, even though we had a nice time looking at scenery and counting Subaru’s on the way there and back. We also agreed that next time we’d check out some of the dirty clubs Montreal is known for. 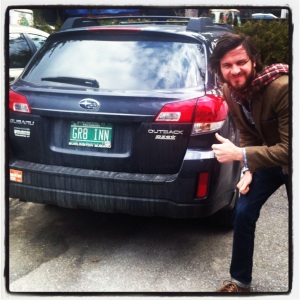 Frank with an awesome Subaru.

A few weeks after Montreal, we popped into Kentucky for the weekend. Again, our trip was centered around meals. Skip to the evening meal, or more like the early bird lunch/dinner (because Frank had to be established at a sports bar by 7:30 to watch the Heels). I’d been dying to try my friends newly opened restaurant, Rye, in downtown Louisville, so there was no question about where to go. We were the first party there by a long shot, at 5:30. Despite the early hour and the empty restaurant, I love what they’ve got goin on there. It’s new and fresh with an innovative, often changing menu of local ingredients. Rye is a really great addition to the Louisville restaurant/bar scene.  In addition to a great meal, the Heel’s pulled off a victory. On to the next round! We watched the game at Troll Bar, one of the many bars/restaurants popping up downtown around the YUM Center, and then headed to meet some friends at Gerstle’s, a surprisingly popular dive bar in St. Matthews near my moms house. Due to the typhoon that was ragging through Louisville, not that many people were out and we weren’t up for moseying from bar to bar, so we called it a night.

Here are a few nice pictures of our farm in Shelbyville, KY. 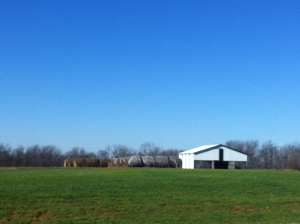 We headed to Lexington on Saturday afternoon to hang with my dad and his wife, Debbie. We got there just in time to catch the UK game, and were immediately offered a drink: standard protocol at dad’s house.

Here’s a pretty picture of my dad’s house, and the view from the back.

We drank and talked and eventually ate some little delicious lamb chops. mmmm. Frank finally got to meet my famous uncle Mark. He’s a magician, and Frank has not only heard all about him for years, but has been dying to meet him. Dying! A little down due to his recent divorce, Mark was unusually quiet during dinner. But he’s never too sad to perform one trick. The invisible card trick. Frank was amazed. Really, ask him. He finally believes in Magic. 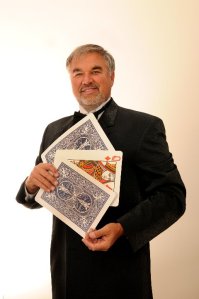 Blah blah blah. Next morning Frank went to hang out with his uncle, who happens to live in Lexington, and I walked to a nearby coffee shop to meet my dear friend Ashley for a much needed catch up chat session. This made me miss Kentucky. Love you Ash!

Later, back in Louisville, we went to the Slugger Museum where the biggest bat in the whole wide world is delicately balanced against the building… or at least that’s what someone told me once.

Look closely…. there we are! 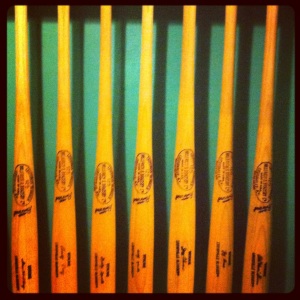 We then went to Patt’s to watch painfully as the Heels lost in the tourney. Despite his disappointment, Frank rallied for my family dinner at Volare for my grandfather’s birthday. It was relatively uneventful, besides my grandparents repeatedly calling me “Sara,” my cousin’s name. I guess I should dye my hair dark again so they don’t confuse us….

And that completed our trip to the Bluegrass. I wish I could say we’d be back in 2 weeks for Derby, but sadly, we wont….