My cousin Sara loves Zac Brown. I didn’t share her sentiment, but couldn’t turn down a Colorado adventure to Red Rocks to see him play. So off we went.

(warning: there are a lot of selfies in this post)

After a long day of flights and waiting around for Sara’s delayed plane, which had to stop and refuel in Colorado Springs after flying ‘round and ‘round Denver due to storms, she and I headed west to Breckenridge. As we ascended into the mountains, all of the sudden we were faced with the dark of night and an unexpected blizzard! I hate driving in the snow, especially at a slippery 7% incline, then decline. Two and a half terrifying hours later we arrived at our B&B, the Fireside Inn, exhausted. The next morning we opted out of breakfast, making it just a Bed with no Breakfast, and ventured out into snowy Breckenridge in search of our own breakfast spot.

The town was sleepy but beautiful. At first step outside, I was reminded, by the clean, fresh Mountain air, of Sara and my early days in Aspen, where we would challenge each other to plunge into the snow wearing nothing but our bikinis before jumping in the hot tub. I can’t even begin to describe how that makes your skin tingle and burn.

Over breakfast we decided to leave Breckenridge, which we thought would be home base for the next three days, in search of a town closer to Red Rocks and a little less high up in the Mountains.

So we packed our things and hit the road, less than 24 hours after we arrived, en route to an unknown destination. First stop, Golden Colorado, where Coors is brewed. Unlucky weekend to try to find lodging in Golden, since it was the Miners College graduation and everything was all booked up. But that didn’t stop us from poking around a lil’ bit. We had a pizza pie at Woody’s Pizza, then ran through the rain to Golden City Brews where we enjoyed a Blond and a Red while entertaining ourselves with a J. Peterman Catalogue that I so unexpectedly found in my purse. 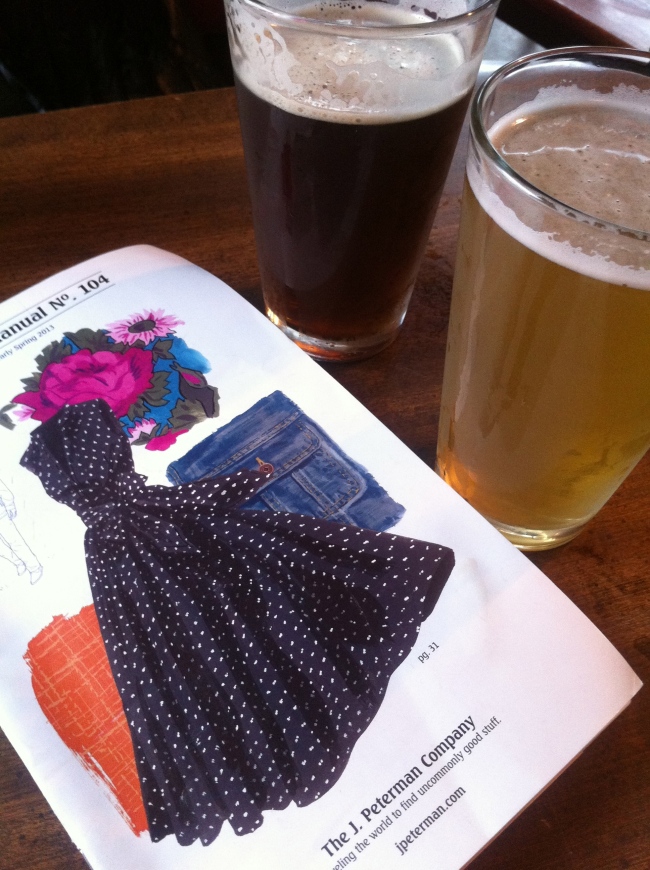 Another wet sprint later, we were back in the car, in search of a nearby town to call home for the next two days. And home we found, in a quiet little town called Evergreen. We called ahead to The Bears Inn B&B, where Vicky welcomed us to the area and told us she had the perfect room for us: “The Nantucket,” but something must have changed her mind in the 45 minutes it took us to get there, since when we arrived, she had switched us to the other perfect room for us: “The Safari room.” (This may have something to do with us revealing that we’d be going to a show at Red Rocks that evening, and the location of the room being on the first floor with a private entrance, as to not disturb the other guests). Anyway, The Safari room was totally decked out in leopard textiles and trinkets that the proprietor herself had collected from her travels. It suited us perfectly fine.

I think Sara and I would both agree that the sweetest thing about The Bears Inn, was the handsome greeter, Mr. Scotty McDougle. Scottie was a scottie with big bushy eyebrows, an overly expressive face and a western collar. He was so energetic that Sara made a comment, to which Vicky responded, “He’s old and on lots of meds.” Lovely. 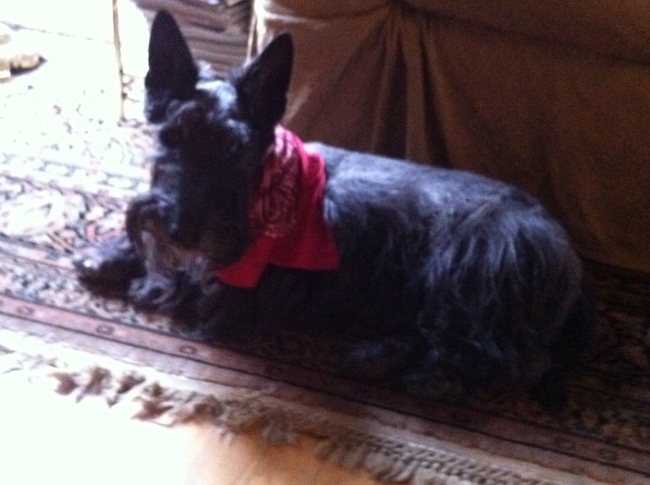 We drove into town for a quick bite and a cocktail at the Kitchen at the Creek, where bartender Greg raved about the grilled corn, and then regrettably told us they were out of grilled corn. But he made a good martini! And even put a dollop of sherbet in for good measure. (until moments ago, thanks to spell check, I thought that word was “sherbert”).

Red Rocks is only 11 miles from Evergreen, but with winding roads, it took a good 25 minutes. The drive, with the beautiful Colorado landscape and DJ Sara playing her Sunny Days mix, was enjoyable, and the tunes made for lovely background music as we approached the Red Rocks stage. Wow, what a sight to see! The venue itself is half the glory of seeing a show there.

As previously mentioned, I’m not a Zac Brown fan, or hadn’t been prior to this trip. The only song I’d heard of his was “I like my chicken fried”, which is catchy but trite and predictable. Based on that song alone, I was expecting some Yankee imposter country singer type with tight blue jeans (which I happen to like), a huge metal belt buckle and oversized cowboy hat… “playing the part”, if you will. But I was wrong, and at the same time, pleasantly surprised by Zac Brown and his band. They are totally cool: beanies, beards and bongo drums. He put on a hellova show. Luckily Sara managed to befriend a lovely lady with bleach blond mall hair, because she allowed us to encroach on her designated seating area towards the front of the stadium, despite our fashionably late arrival.

High on music (and quite possibly on second hand weed), we hit the road back to The Bears Inn to soak in the hot tub. Talk about wide open spaces! I’ll tell ya what, you can’t see stars like those in Beantown.

The next morning after a delicious 2 course breakfast of a yogurt parfait and eggs benedict on rosemary toast, we decided to head back out to Red Rocks to see what we could see in the daylight. 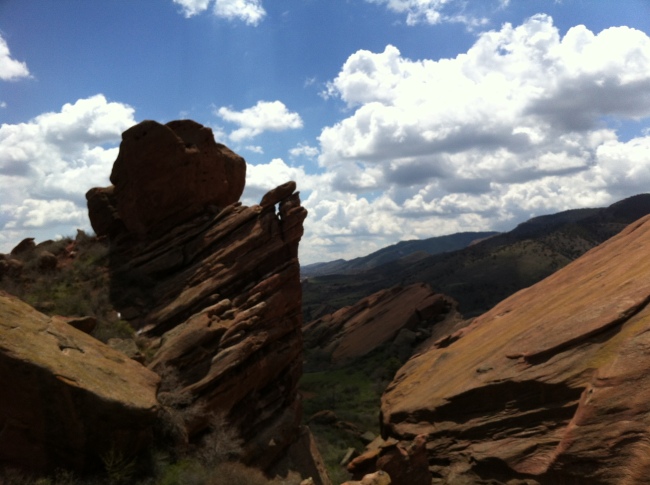 The cloudless blue sky allowed for a crisp Colorado hike. We huffed and puffed due to the altitude, and managed to work up some good heat. There were hundreds of people exercising on the Rocks. Sara and I joined in by walking up the stairs a time or two. You can see Denver from the top!

Colorado inspires healthy habits, which is one reason I left wanting to immediately move there. We had a healthy morning/afternoon of climbing rocks and hiking the surrounding area. These little fellas even greeted us as we walked along the trail.

The blue sky outlining the red rock formations sure made for beautiful landscape. Which inspired this string of selfies : ) 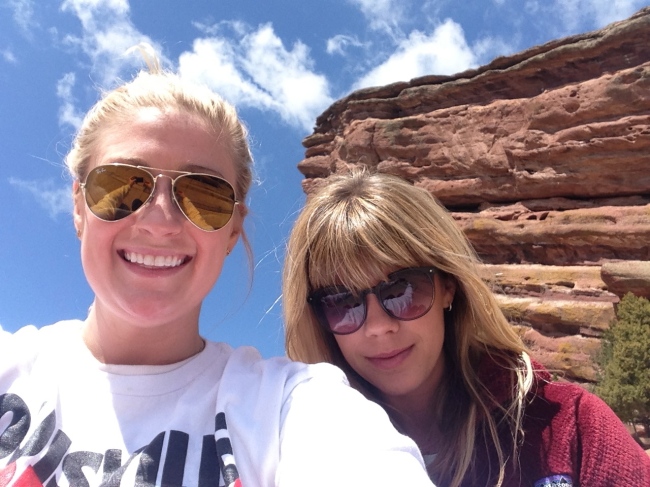 And this one in the car, for good measure. 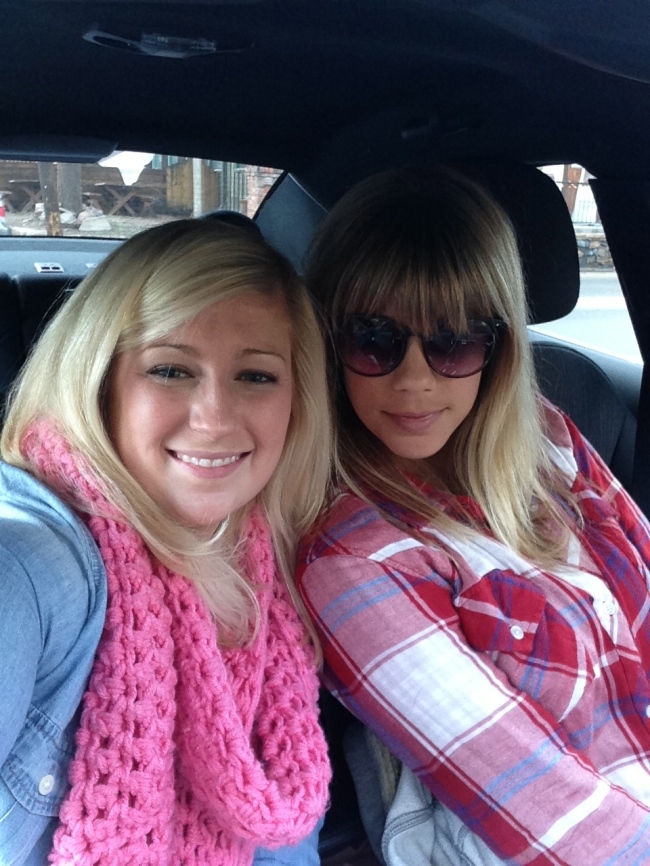 After Red Rocks we drove a little closer to home and picked another spot to hike, Three Sisters Park. Somehow “planking” was brought up, and we discussed how ridiculous a trend it is, and how kids are doing such odd things these days…. Moments later, this happened:

We were tuckered out after a morning and afternoon of hiking and planking, so we headed home, freshened up quickly and found a quaint little dinner spot, Willow Creek, on Evergreen Lake. Antelopes literally entertained us by jaunting around and chasing each other in the water directly in front of the restaurant  The food was delish. Highly recommended for atmosphere, scenic views and cuisine. Our interesting and awkward waiter suggested a thing or two for us to do after, but with the time difference and a packed full day of using our muscles, we opted to go home and ready ourselves for our upcoming departure. We kissed Mr. Scotty McDougle goodnight and conched out.

A slow breakfast resulted in a hurried rental car drop off, and a frazzled check-in and security process, but luckily we both made our flights. As the plane took off over Denver, I decided I would be back soon. In fact, I decided I wanted to move to Colorado once and for all. This wasn’t just another trip that left me wanting to move wherever it was I was visiting. Nope, this was real.

4 thoughts on “Red Rockin’ with the rhythm”