Instantly upon arrival into Chicago, I was in love: the sprawling city on the crystalline lake; the evening sun hitting the mirrored skyscrapers just right so that the light reflected and scattered and danced; the city’s people running and strolling and vollyballing on the beaches along Lake Michigan, this was a place I could live. We arrived with a warm welcome from Olga’s friend Lauren, who had agreed to host us for 2 nights in her incredible apartment in Lincoln Park. Shortly after a leisurely dinner accompanied by a much-anticipated glass of wine, we hit the hay. I know, totally lame, but get used to it because I’m old and I can’t party like I used to. In addition, Olga and I have both been amazed and appalled at how incredibly exhausting all-day driving can be. I mean, all we’re doing is sitting on our asses listening to music, asking each other “would you rather” questions and looking out the window… how tiring can that be?

Here are a few examples of “would you rather” questions, courtesy of cousin Sara:

Anyway, we had a lot of ground to cover in the Windy City the next day so we shut off our brains to reboot and reload.

Wednesday started out with a looong hot, late-morning walk from Lincoln Park to the main strip of downtown Chicago, where we caught a 90-minute Wendella river and lake boat tour. We were absolutely delighted to discover that there was a bar on this boat. Yippee. However, scorching, beaming down sunshine + delicious bloody marrys = quick tipsiness. No matter, we were thoroughly enjoying ourselves and the informational tour. I learned all kinds of interesting and wonderful things about Chicago, none of which I can remember well enough to tell you at this moment.

But we took some nice photos: 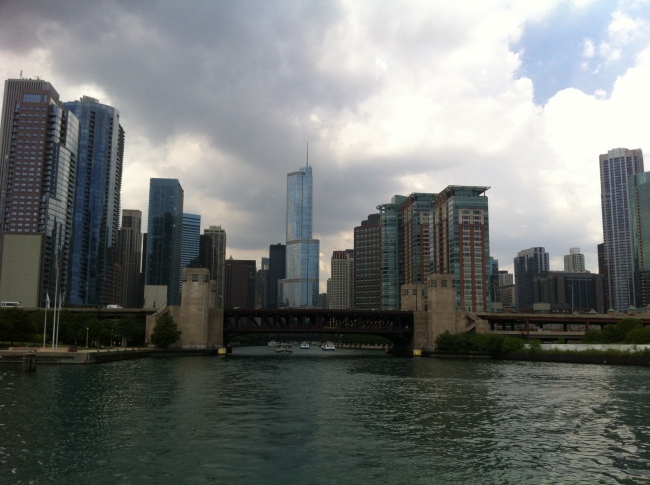 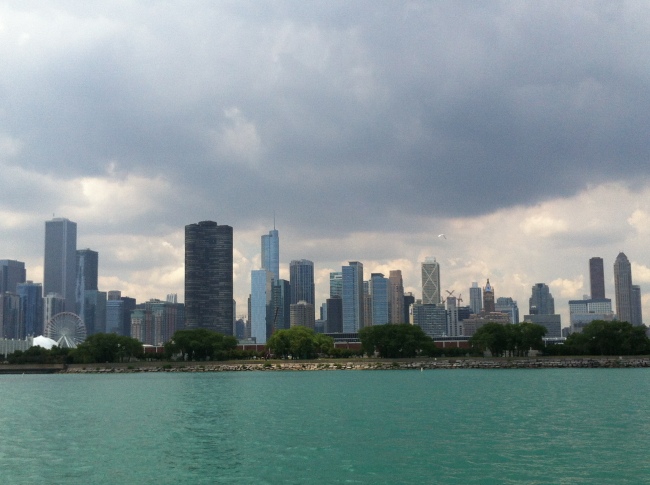 After the booze cruise, ahhem, I mean river and lakes tour, we went to a restaurant near Millennium Park for a lunch that consisted of cheesy bread, tuna tacos and champagne (seemed like a great idea at the time), then moseyed on over to the park for some touristy photo opps of that enormous reflective bean. 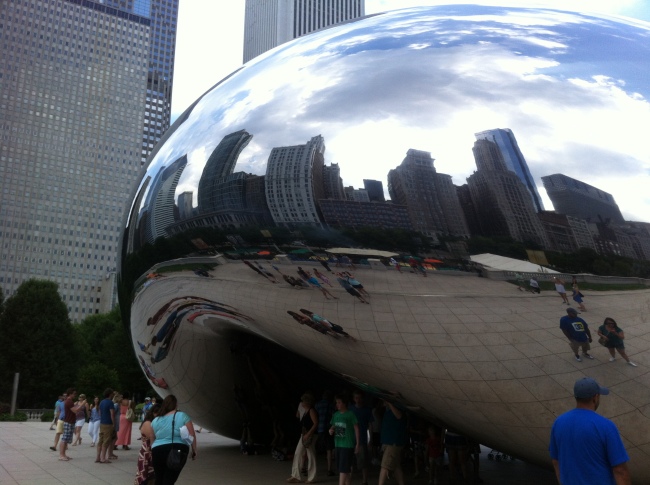 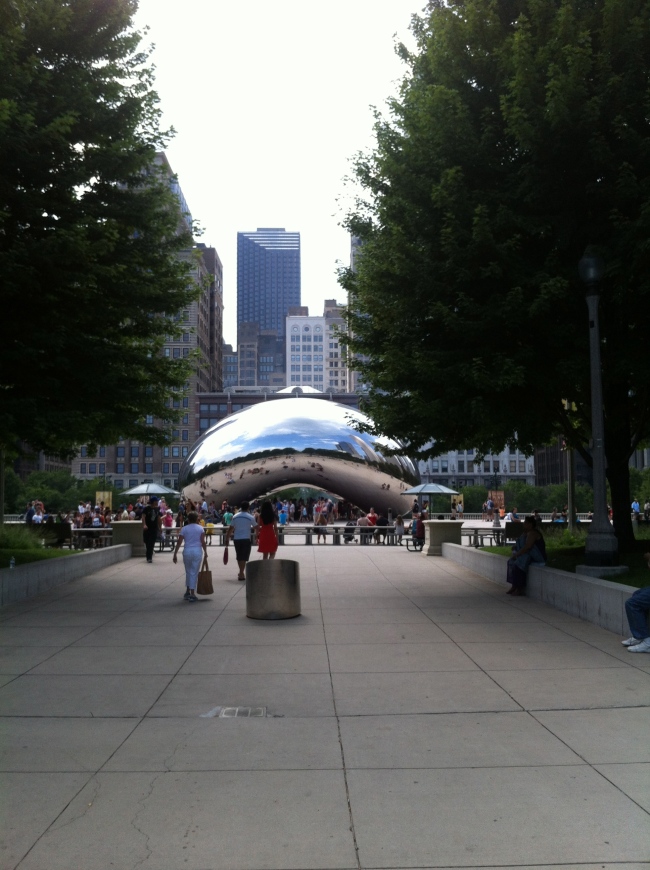 We then took the looong hot walk back home and slept for what we planned to be 30 minutes but ended up being 2 hours. Whoooops.

We woke in a daze, gathered ourselves, put on our Wednesday best, greeted Lauren as she arrived home from work, scored a taxi and headed to some hip rooftop bar downtown to meet Olga’s other friend Lena. Besides the height of this place and the views, the few other notable features were the cocktails and the waitresses carrying them, who all appeared as if they were wearing their much younger and thinner sisters’ uniform. They were very kind and attentive though, so I can’t complain. Much later we shared a wonderful dinner at RPM, which is owned by Julianna and Bill Ransic (am I spelling that right and does anyone know who they are?), and then taxied home to crash once again.

Next morning, after I battled through a sweltering hot and sweaty run while Olga finished a project she’d been working on, we hit the road north towards Milwaukee, where we would spend a few afternoon hours before headin into Madison.

I’m sure you’re wondering what the Roadside America adventure was for this leg. Well, we drove 15 miles out of our way to find the Shoe Tree. You know…. a shoe tree: a tree with shoes thrown up in it. People have been throwing their shoes up in this tree since the 60s. Exciting! Alas, after finding the supposed location of said tree, there were no shoes to be seen. We circled around and around to no avail. We then found a cop (fuzz, cool it!) sitting in a nearby park and asked him where we might find the Shoe Tree. He told us, much to our chagrin, that most of the shoes had been removed for safety reasons. Apparently they kept falling on cars as they drove under. Strike two for Roadside America. But we’re not ones to give up.

Back on the road, we rolled into Milwaukee for a late lunch at a place called Millioke. We picked this restaurant based on the tagline: “Meat. Cheese. Beer.” It doesn’t get much more “Wisconsin” than that. I ordered a Spotted Cow beer which was so refreshing and delicious that it may very well be my new favorite, and Olga, no doubt feeling ambitious, opted for a bloody marry garnished with a skewer of meats, cheeses and pickles, and which came with a mini Miller High Life accompaniment. 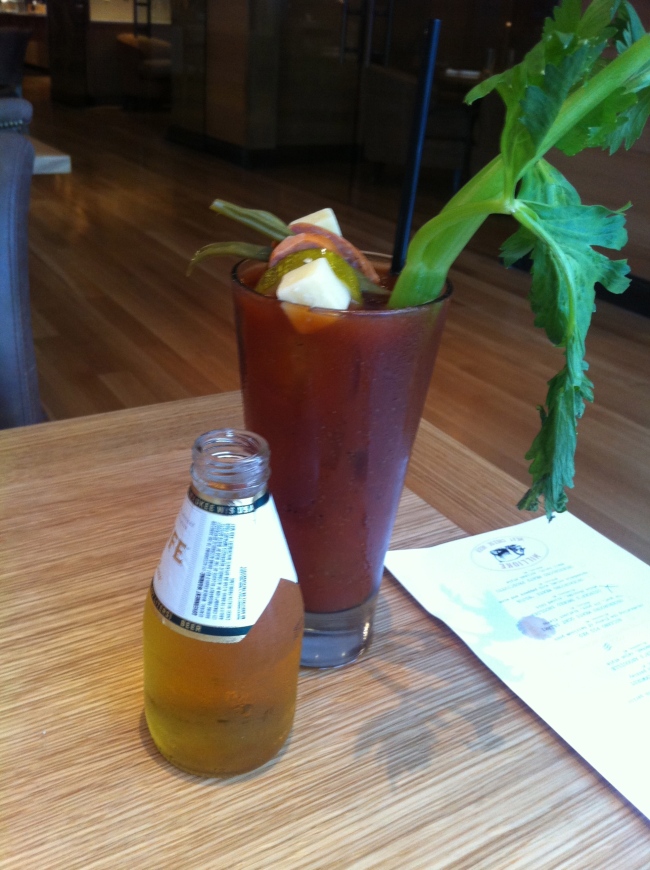 We decided to order two nice and healthy house salads, but then quickly added a cheese plate because we were in Wisconsin and it would be a crime not to eat as much cheese as humanly possible. All was good and we left quite uncomfortably full and satisfied. We attempted to “walk it off” but soon found ourselves back at the air conditioned car. A/C: 1, sweltering heat: 0. We drove around to see what we could see. I thought this building was worth a photo because it looks like a cross between a space ship and a pterodactyl.

We were still full when we parked on State Street in Madison, and had whole heartedly agreed that we would never eat again. Or at least we would never eat cheese again…. But so many people had told us that we had to try cheese curds in Madison… okay, so AFTER today, AFTER we try cheese curds, we’ll never eat cheese again. So for the time being, we settled for ice cream.  Local, homemade ice cream. Wisconsin may be known for cheese but they have pretty damn good ice cream too. Mmm. There are two little fat men living inside both Olga and me. There is no doubt about that.

We walked along State Street to the UW campus, which was mostly under summer construction, but nonetheless beautiful (ain’t got nothing on UGA) then turned around and headed to the Capital building in the center of town. Big, towering and marbley white, the Wisconsin Capital building is a gorgeous and demanding presence in town. 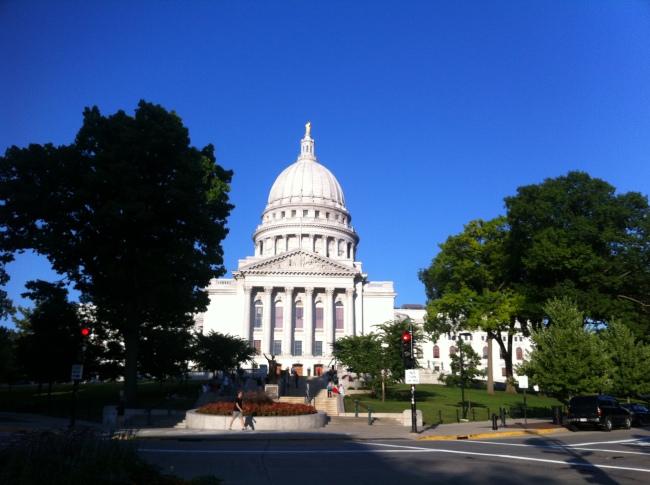 We continued on to James Madison Park where we walked around in the warm, sun-heated waves of Lake Mendota and observed friendly games of frisbee and volleyball.

After the lovely dip, we hit up the Terrace, a popular lakeside area of campus where there’s a stage for small performances, sailboat docks, a beer garden (yes, you can order and drink beer on UW campus) and a picturesque sunset viewing picnic area.

What a magnificent day so far, besides the crippling lunch. At 8:30 we decided that we should eat something even though we weren’t hungry, so we chose a spot on the square near the Capital called The Ol’ Fashion, where we tried fried cheese curds, local beef jerky and a pickle plate. Yum, yum and yum. The ol’ fashion I ordered: not so yum, but three outta four ain’t bad. Now we were really never ever eating cheese again. We were later told that those cheese curds we ordered were usually, and better enjoyed by four people splitting, not two….. Fat men inside.

Finally, after a long and gluttonous day, we headed to our lodging for the night. Alaina, a college and tennis friend of one of my good friends, had generously offered up her guest room. The world is ever more connected thanks to Facebook. To make this Wisconsin experience even more complete, there was homemade cheese being aged in a mini fridge in her spare room. We refrained from tasting.

Next morning we woke bright and early, bought a bunch of fruit and vegetables for the drive west because we decided to restrict ourselves to a clean vegetarian diet, then hiked along Lake Mendota to Picnic Point, a beautifully preserved wildlife area near UW. It turned out to be a little over a five-mile hike, which was exactly what we needed after stuffing our face for 48 hours, and before the 7.5 hour drive to North Dakota.

1,200 miles under our belts so far and a whole hellofa lot more to go.