From Yellowstone to Salt Lake, we tried to find something, anything, to explore on Roadside America, but alas, there is no cell service in Idaho… just potatoes, which we ate for lunch at a gas station. Because that’s what you’re supposed to do when you’re in Idaho. During this drive, we also happened upon the Pioneer Historic Scenic Byway, which was curvy and beautiful and completely deserted.

We arrived in SLC and wondered what on earth we oughta do…. We decided that the only suitable first thing to do in Salt Lake was to go to the massive Temple of Jesus Christ and Latter Day Saints.

But once we got there, we weren’t quite sure what to do, so we took some pictures, brushed off a sweet old woman who wanted to tell us all about Mormonism, and hit the road. We also wanted to get into the Great Salt lake, but were warned against it by a hotel concierge who said we’d get eaten by flies…So we found a nice little hiking trail that bordered the city, and took advantage of the opportunity to stretch our legs.

As the sun went down over the city, we drove to our lodging for the evening. Here is how we got linked to this wonderful family. Olga’s friend has a friend in SLC. This SLC friend was not in town, but was telling her friends about us. Among those friends there became a bidding war. And the mother of the family who so graciously took us in argued that since she had three sons, and wants some girl time, so she gets us for the night. She won. Worked for us. Olga and I completely fell in love with Mary and Jeff and their adorable son Sam. They weren’t there when we arrived, so we freshened up to walk to a nearby restaurant. As we were about to leave, Mary walked in, exploding with excitement and enthusiasm, had curry chicken salad, cheese and wine laid out in an instant, and before we knew it, we were staying in, drinking wine and telling each other our life stories. They pulled out the map of the US and we described our trip. They pulled out the map of the Bay Area and told us which areas to avoid.

After our night sleeping on the ground, the long drive and lovely evening with our adopted family for the night, Olga and I couldn’t have been happier to jump into a real bed with a real mattress in a really dark room. We slept like babies.

Tuesday morning we woke up, had coffee and breakfast with our new friends and prepared ourselves for our looong haul to Lake Tahoe: 9 hours…

There isn’t a whole lot between Salt Lake and Tahoe, besides the Bonneville Salt Flats, which were cool, and Reno. 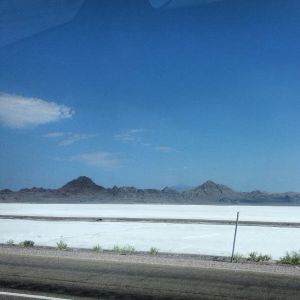 But Roadside America was going wild. We deicded that we just simply couldn’t pass up the world’s largest dead polar bear, and we figured we’d have lunch while we were at it. So we stopped in Elko, NV for a Basque, family style lunch of cabbage soup, salad, and thinly sliced beef, then skipped across the street to the Commercial Casino, where White King stood towering over us all in his majestic glory.

Two thousand pounds of muscle, fur and claw, 10 foot 4 inches tall, he should have commanded the attention of the few afternoon gamblers, but they were worried about other things, like their smoldering cigarettes and the coins going into the slot machines. Anyway, White King was killed by an Eskimo back in the 50’s. WELL worth the pit stop.

Even with frequent stops and driver switches, at about hour 8 we hit our mental limit. But there was only a half hour to go… We started to get loopy. Olga hit the bottle. Shit started to get weird. We exhausted all of our car games: played guess who? and Would You Rather and ate twirlers and various other sugar loaded treats and voila, we were crossing the border into our new home states and entering our resort in Lake Tahoe. Yes, I said resort. A studly sweetheart we’d met, one of the friends of a friend, took a serious liking to Olga. He was driving back to San Francisco from Jackson and “coincidentally” decided to stop in Tahoe. He treated us to a suite at the Village at Squaw Valley Inn, and accompanied us out for an evening of dinner and drinks. 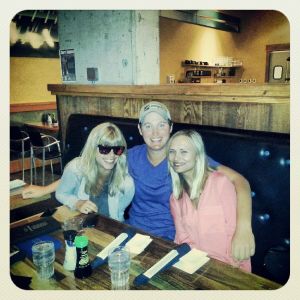 Tahoe is beautiful. I woke up early and hiked a little solo hike on the series of trails behind the lodge. Ain’t no better place to get lost in your head than in the woods.

I took in my wilderness surroundings while daydreaming and considering the offers of a handsome gentleman back east who is very strategically trying to convince me to stay and live with him in Boston in order to save money for our journey around the world….. Travel…. He’s a cunning little bastard, and has figured out the way to my heart. I’ll take the world wide trip, but I’ve set something in motion with this move out west, and I’ll be dammed if I don’t see it through.

Snap out of it.

This quick trip to Tahoe was just enough to really whet our appetites. It’s a popular destination for people living in San Francisco, so we’ve vowed to come back often. We hit the road on our final, short leg to San Francisco.

Pulling into the city, over the Golden Gate Bridge, a sense of jubilation came over us. Here we were, finally, two and a half weeks, 3,560 miles, 18 states, and countless new friends later, in our new city, crossing the most notable feature of beautiful San Francisco. Success.

Someone asked me this shortly after our trip was complete: “What was your Aha! moment? What did you realize during this journey?”

My answer: Most importantly, that people are good. I think back on, and am moved by, all the gracious accommodations made on our behalf (the Petras-Gardeners in Pittsburgh, Lauren in Chicago, my brother for hooking us up with the discounted room at the Hampton in Fargo, Peter in the Badlands for helping with tent set up, Darryl in Nederland, Pam in Jackson, Frank and JoAnne for tent set up advice and fire starting in Yellowstone, Mary and Jeff in Salt Lake, David for our suite in Tahoe, and Pappa J, once again, for housing us in the Bay Area)

I also realized, over and over and over again, how vast and incredibly beautiful our great country is. The beauty and diversity of the US almost rivals the kindness of it’s people.

A special note to Olga: I couldn’t have hoped for a more easy-going, open, willing, curious and enjoyable travel companion. Thanks for putting up with me. I look forward to living in a tiny bunk-bedded room together in San Francisco.

And now guess where I am?

Less than 24 hours after I arrived in the Bay Area, I boarded a plane back to New England. What can I say? I have things to do and people to see on the east coast before I head back to San Francisco “for good” in mid-August : )