So, now that y’all’re all caught up on where I am and how all of my furniture is hand built, let’s get to the good stuff.

My absolute favorite part of living in San Francisco are the countless day/weekend trip options closely available to the city. National Parks, coastal hiking trails and lost highways abound. Time to briefly brag about, ahhemm, share my last few months worth of adventures.

There was Tahoe, where it was 65 degrees in February – not quite what I had envisioned the snowy winter wonderland to look like, but beautiful nonetheless.  We rented a cabin in a town called Stateline because it’s literally located on the state line separating California and Nevada. Our cabin was conveniently situated at the base of a small mound of boulders which could easily be scampered up to enjoy this view:

And here’s one at sunset:

We drank and ate and played Jenga and had some dance parties and couldn’t quite decide if it was winter or spring. Gates and my roommate Meg and a few other folks went skiing and got sunburned while Olga and I and a few other folks hiked to the lake wearing shorts. Despite the uncharacteristic weather, it was a nice introduction to the popular California getaway. Here’s a photo of the lake: 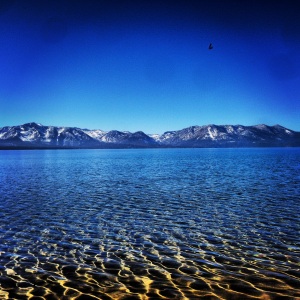 Devils Slide – a portion of Highway 1 that used to constantly crumble due to landslide, therefore, they closed it permanently and made an alternate (and much safer) route: a tunnel through a nearby mountain. I initially stumbled upon this abandoned strip of highway during an ill planned hike in Pacifica with Olga. But good things often come out of getting lost, like this little piece of California coastal history. What is it about abandoned things and forbidden places? I just can’t stay away. It’s like an invitation with big flashing lights that beckons “Come on in and poke around.” Gates and I did a little trespassing and some semi-dangerous and ultra thrilling coastal trail traversing.

The highway is being turned into a pedestrian/biking trail. Opening soon if not already. But I imagine now it’s not nearly as cool because it’s A) no longer forbidden, and B) filled with people.

In April, we drove up to Redwood National Park/Arcata, which is about 5 hours north of SF. We walked among the giants, saw a movie at the country’s oldest, continuously operating movie theater that was actually built for the purpose of movie viewing (lots of qualifiers!), paid $5 to drive through a tree (worth every penny), came face to face with some bears (while in our car, luckily), hiked a little bit of the lost coast (where I found a piece of driftwood that perfectly resembled a door knocker, which was later stolen, along with my ukelele, from my car), and discovered another portion of an abandoned highway (apparently I have an eye for finding lost highways). We stayed at an old historic home that had been converted into a B&B, run by a lovely couple whose names I’ve forgotten. The man wouldn’t shut up (a guaranteed and necessary quality of a B&B owner, as well as a quality I’ve become quite accustomed to since meeting Gates) while his wife stayed in the kitchen in her bathrobe. The Mr. yacked on for a half hour at breakfast one morning while having pancake batter all over his face. Awkward. 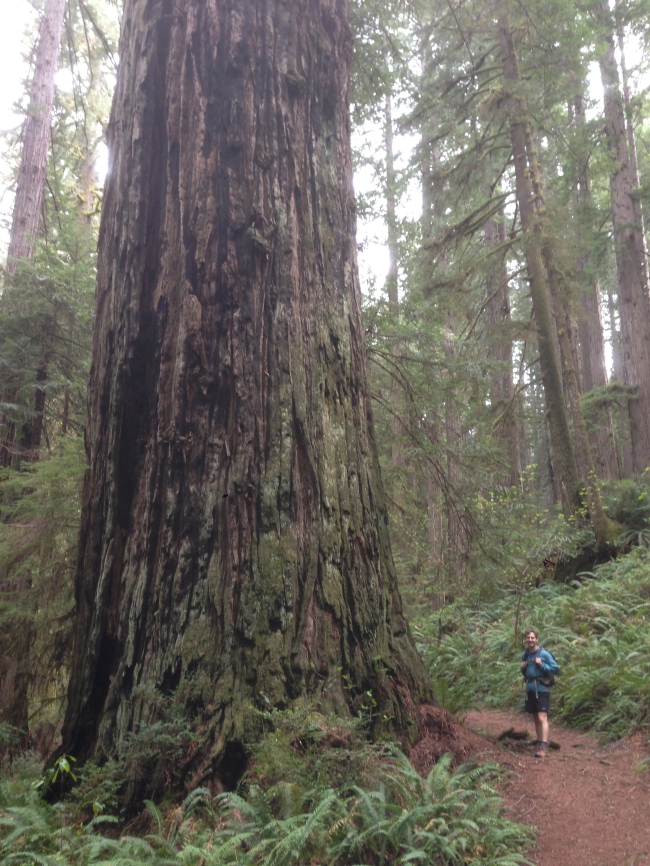 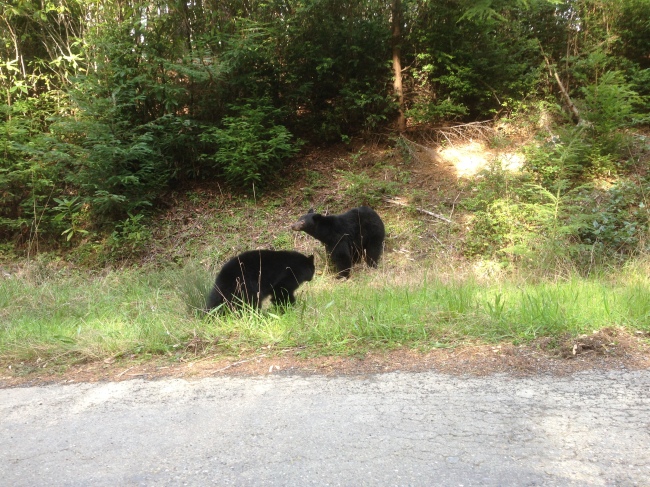 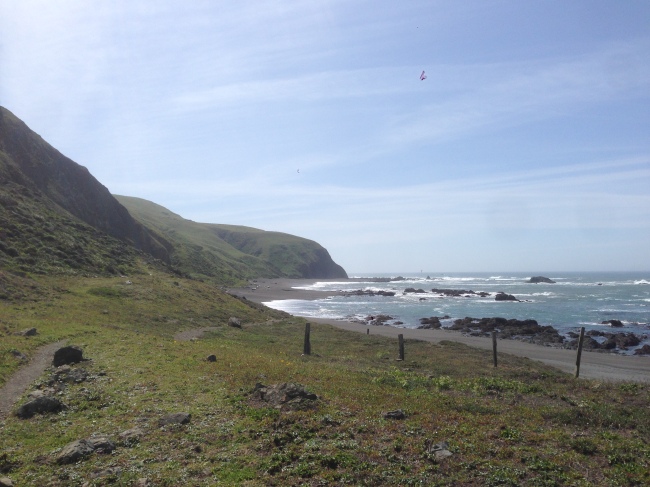 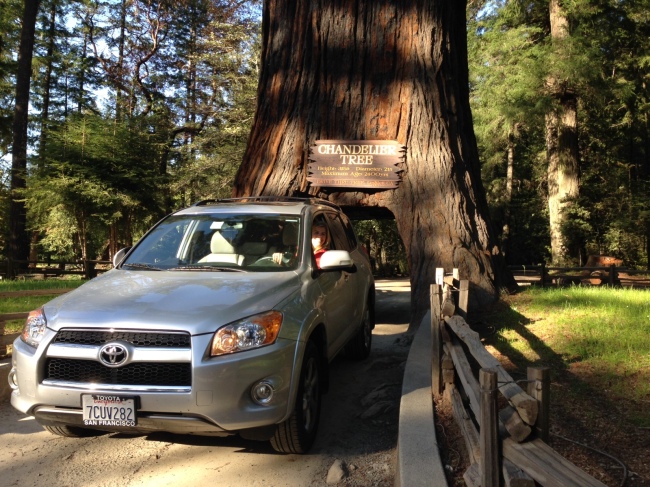 The Marin Headlands, right in our backyard (just over the GG Bridge). A go-to spot for SF views, old missile launch pads and abandoned forts. I take everyone here when they visit because it’s very close and very beautiful and everyone very much loves to drive over that dammed bridge. So if you visit, you’ll see this: 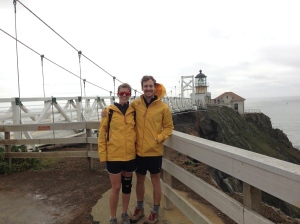 Last weekend we drove up to Fort Bragg, which is about 5 hours north of SF, just up from Mendocino in Humbolt county, aka the Emerald Triangle, aka the region where the most cannabis is grown in the US. Weed had nothing to do with why we decided to spend the weekend there. We went up with Gates’ brother Owen and his lovely girlfriend Quincy (who both live in SF) to check out the site of an architectural project that Gates’ dad, Jim (who refuses to call me Caroline and insists on calling me Sloan) has been working on for the past few years. The project is a coastal Inn which is built on the site of an old town called Newport –  big during the early Redwood logging years. We stayed at the owners house which is a short walk away from the Inn. Here are some photos of the house and the views that we gawked at all weekend: 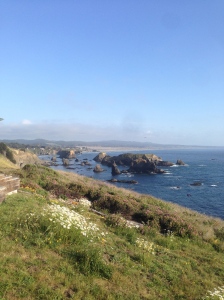 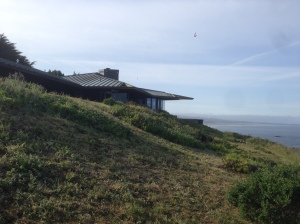 And here’s a picture of the Inn, to be completed in May 2015 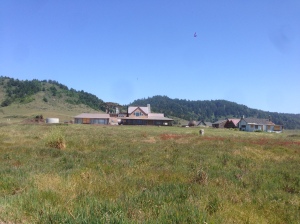 The area is so amazingly remote and tranquil. I never wanted to leave. A few highlights: Watching whales leisurely meander by on their journey north (sorry no picture), eating freshly caught Sea Urchin (still moving), which Jim broke into and prepared right in front of us (if this thing doesn’t scream “don’t eat me!” I don’t know what does): 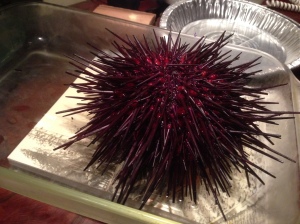 Seeing this dead and totally dried out cow: 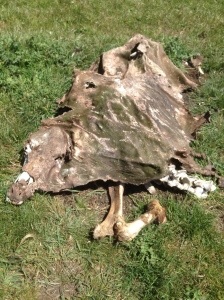 Climbing down into a mussel patch to record some intros for a Warren Vermont radio station (Jim loves the way I say “five” and can’t get over the fact that I frequently use the word “y’all’re”):

And lots and lots of quality time with people I like a whole lot: 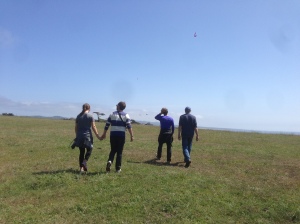 A few additional photos because why the hell not? 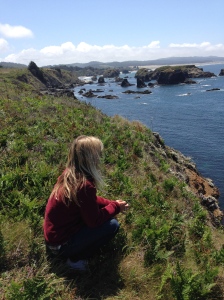 And finally, there’ve been more than a few trips to nearby Sonoma/Napa. 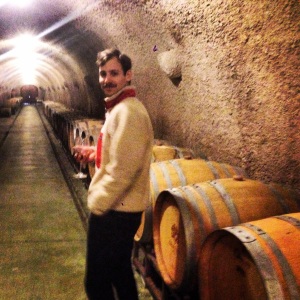 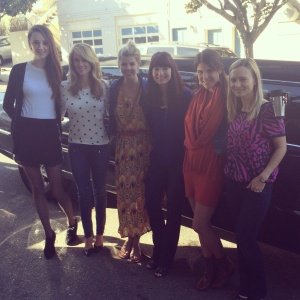 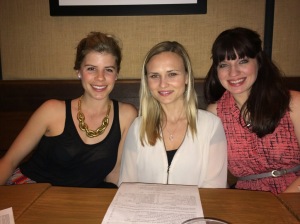 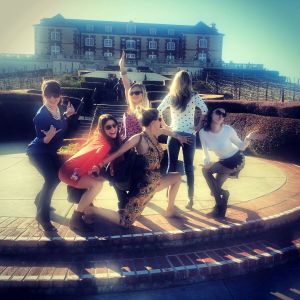 My second favorite thing about living in San Francisco is that people come visit (unlike Boston). In the past month I’ve had three of my dearest friends stop through, as well as my mom, brother and his girlfriend. 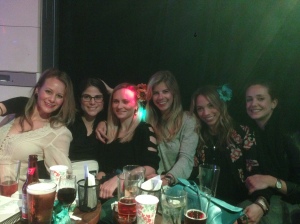 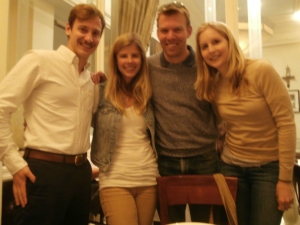 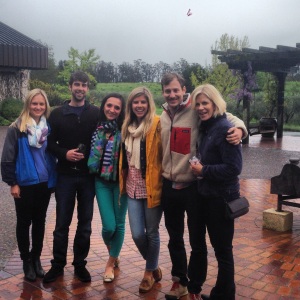 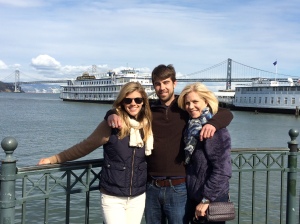 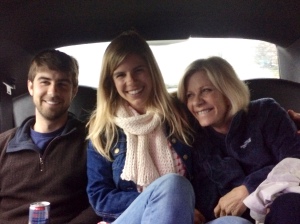 In other news, I’m now 29 years old and I no longer have bangs, and here’s a picture of my skeleton:

Many adventures to come in the next few months, including an Indiana farm wedding, Crater Lake, Yosemite, Amagansett, Boston, Vermont and maybe Australia (if my brand new boss approves….) Yeeeehhawww.

4 thoughts on “Pump up the Jam”