Well, this is it, folks. We’ve completed the almost final leg of our Road Trip East. Having traveled 7,565 miles since leaving San Francisco, we’re resting (and doing laundry) in Vermont before the final 227 miles to our easternmost terminus: Portland, Maine.

When I last left you we were in Minneapolis, where we sampled Gates’ friend Jim’s crisp cider at his cidery, Sociable Cider, ate a decadent meal and sat in Jim’s hot tub during one of the most aggressive downpours/thunderstorms I’ve seen in a long time (in hindsight seems slightly dangerous – at the time there wasn’t a better idea in the world). We left two monstrously huge Irish Wolfhounds behind on Tuesday morning en route to Kakabeka Falls near Thunder Bay, Ontario. 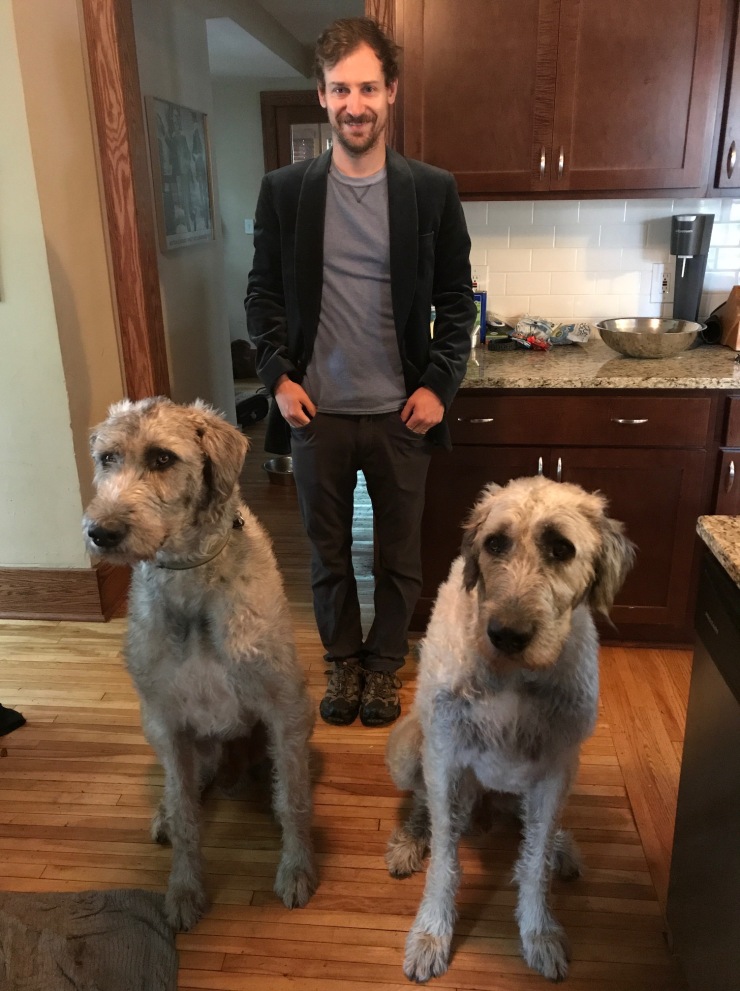 The drive along Lake Superior is an especially exquisite one this time of year, and the seemingly endless lake has the aquatic equivalence of the Canadian Rockies when it comes to the humbling factor.

Here’s a picture of me in an incredibly expensive, custom made Hermes hoodie, gazing out at the Lake

We drove the bridge over the falls just as the sun was setting and quickly rearranged the car to accommodate two small bodies in the back. By this time of year, many campsites are closed and the ones that remain open are nearly deserted, which is quite nice. We must have some pity-inducing quality about us because as we were rummaging around the next morning in preparation for a short waterfall hike, our friendly neighbor (and one of the only other people at the campsite) called us over to offer us coffee. As an aside, I believe that Canadians are the friendliest people on earth. As this kind man filled our mugs, he told us that he was an avid hunter and only shoots pheasants with his .22. When we left, I wished him luck out in the woods with the birds, to which he laughed and replied “Oh, I don’t need luck.” Here is an early morning picture of the campsite and the falls

After visiting the falls, we headed around the north side of the Lake to our next campsite in Lake Superior National Park, where we were one of only three groups of campers. Before settling in, we hiked around a little loop and up the nearby hill to a beautiful Lake Superior overlook, where Gates lost his sunglasses. I was carrying around a half eaten bag of marshmallows that I’d been unable to roast since we hadn’t had a fire in awhile, so we set out in search of some firewood, most of which was wet due to recent rain. I’m not going to say that Gates scaled a fence in the deserted campground to snag a bag of dry firewood, but I’m also not going to say that he didn’t. And anyways, we put a $20 US in the campsite fee envelope box when it was only $10 CAD per person so with the exchange rate, even if he did scale that fence, it would have pretty much come out even…. I think….. An hour later we had a raging fire over which to roast marshmallow, a nice little appetizer plate of tomatoes, cucumbers, hummus and pimento cheese, and a pot of Annie’s mac’n’cheese with avocado.

The next morning we were on a tight schedule in driving the southeast portion of the Lake en route to Manitoulin Island where we had a 3:50pm ferry to catch and a bunch of construction traffic at which to get angry and delayed. So when we showed up to the loading dock at 3:20 and the woman checking reservations asked “You know you’re supposed to be here an hour before departure, right?” we played dumb and said “Whoops! Nope, didn’t know that. Sorrrrryyyy!” The Chi-Cheemaun Ferry, meaning “Big Canoe” in Ojibwe coasted through Owen Sound and into the “open waters” for an hour and 45 minutes while Gates flitted around from rail to rail and from observation deck to bar and from the bow to the stern. I’ve learned that much like my dad, my husband is incapable of sitting still.

Here’s me doing the gangster lean…. 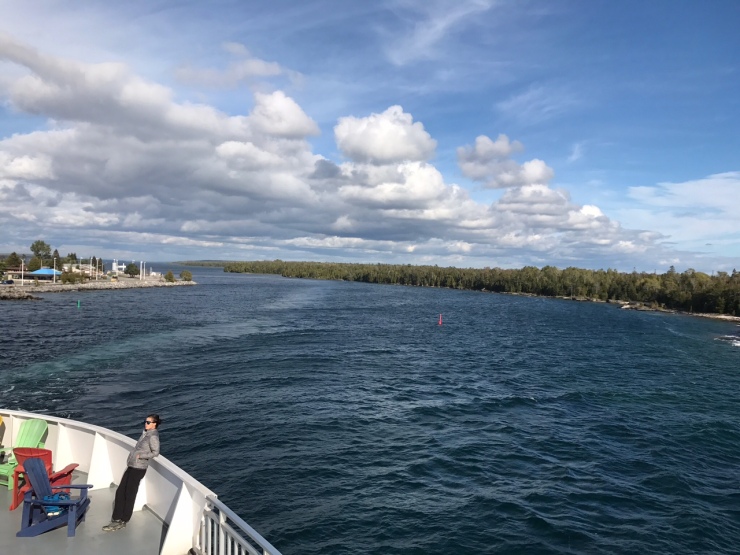 Once in Tobermory, we found our campsite, walked along Cypress Lake as the sun was setting and settled in for the night in preparation for our longest drive yet.

Friday morning we hiked to the Grotto, which is a very cool coastal rock formation along the Georgian Bay with water almost the color of Moraine Lake. Almost. Luckily, due to the “off season,” the usually quite crowded attraction had only a few other people milling about.

After poking around a bit and taking a few selfies, we headed back to the car and hit the road southeast to Lancaster, PA, a mere 10 hours and 45 minutes away.

On our way we stopped at Niagara Falls, which is also where we crossed the border, yet again. This was my first time to Niagara Falls. It is an impressively powerful sight, however, the crowds of people and the casino-amusement park feel of the place was overwhelming and distracting. I did see a woman who set up her small dog, clad in a sweet little sweater with bows, on a pillar near the falls to do a long photo shoot, which made the stop worth the trouble. It was also nice to stretch our legs. Onward! We rolled into Lancaster at 9:30pm, just in time to make a late appearance at the post rehearsal dinner cocktail time.

Saturday was a lovely day in Lancaster, a city which I had never been and was anxious to explore. I love all the brick row houses (I’ve never seen so many in one place) and the restored industrial buildings. We went to the Central Market, which is apparently the oldest farmers market in America. We tried scrapple, a Pennsylvania Dutch dish of a bunch of ground meats and spices, sortof like sausage. We walked around the city, popped into some antique stores and went back to our AirB&B (a row house!) to hang with some friends and drink Sociable Cider before hitting the bus to the wedding. 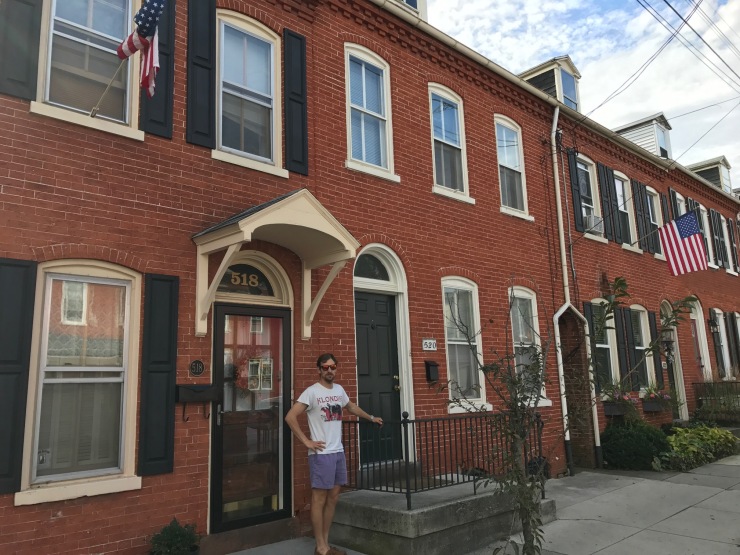 I have to say, after 32 straight days on the road, reintegrating into society wasn’t so bad. And although I doubt I’ll eat another can of tuna fish or box of Annie’s mac’n’cheese anytime soon, it’s sad to see our #RAVlife come to an end.